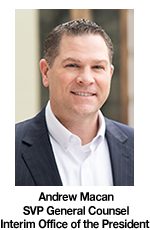 W. Andrew Macan has served as Neuronetics’ Senior Vice President, General Counsel, Chief Compliance Officer and Corporate Secretary since January 2020 and is currently working in the capacity as Interim Office of the President alongside Steve Furlong. Prior to joining Neuronetics, Mr. Macan was Senior Vice President, General Counsel and Corporate Secretary of U.S. Silica Holdings, Inc., a Russell 2000 diversified minerals company, from October 2018 until January 2020. He served in roles of increasing responsibility with Axalta Coating Systems, LLC, from October 2013 until October 2018, most recently as General Counsel and Chief Compliance Officer, Americas, and The Chubb Corporation, from October 2003 until October 2013, including as Vice President, Corporate Counsel and Secretary for over 8 years. Mr. Macan began his career in private practice at Ballard Spahr LLP and Dechert LLP. He earned a B.A. in Government from Franklin & Marshall College and his J.D. from Emory University School of Law with distinction and Order of the Coif.