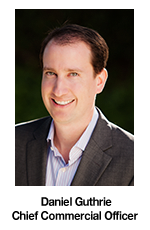 Daniel Guthrie has served as Chief Commercial Officer since May 2018. Prior to joining Neuronetics, Mr. Guthrie was Vice President of Commercialization at JADAK, a business unit of Novanta Inc., from January 2017 to April 2018. Before joining JADAK, Mr. Guthrie was a General Manager at Zimmer Biomet Holdings Inc. from August 2011 to December 2016, where, among other roles, he led the Asia Pacific business for the company’s dental implant division and regenerative therapies group.

Mr. Guthrie earned his bachelor’s degree in finance and marketing from American University and his MBA from Southern Illinois University at Carbondale.