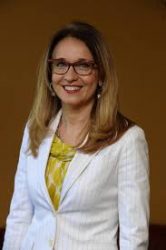 She received her Diploma in Psychodynamic Therapy after she completed the two-year training program at the Houston Galveston Psychoanalytic Institute between 2000 and 2002. Currently, she is Board Certified in both Adult Psychiatry and Child and Adolescent Psychiatry.In 2002 she started her Private Outpatient Clinic (currently named Midtown Psychiatry and TMS Center) while she also worked as the director of the Child and Adolescent Inpatient unit at the Intracare Psychiatric Hospital in Houston, Texas.

In 2011 she became certified in TMS (Transcranial Magnetic Stimulation Therapy) a noninvasive, outpatient therapy cleared by FDA as an innovative treatment for Major Depressive Disorder resistant to medication therapy and for patients that encounter side effects from the traditionally used pharmacological agents.

In 2013 she received her training in NLP (Neuro-linguistic Programming) as a motivational coach and NLP practitioner, preceding her certification as a Master NLP practitioner.