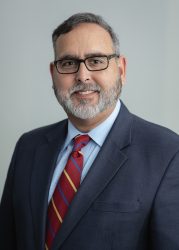 Dr. Dueno came to Cincinnati to attend Xavier University and received a B.S. in Natural Sciences in 1986. He worked in Biomedical Research at the VA Hospital until 1987. He returned to Puerto Rico where he graduated from Universidad Central del Caribe School of Medicine in 1992. He later returned to Ohio and completed an internal medicine internship at Mount Carmel Hospital in Columbus, OH; and then residency in general psychiatry at The Ohio State University. He is a board certified psychiatrist in Psychiatry and Neurology.

He began private practice in Dayton working in both the adult and geriatric populations. He has served in multiple local hospitals, clinics, and nursing home settings throughout the Dayton and surrounding communities since 1996. He joined Midwest Clinical Research Center in 2011 and has been the principle investigator in over 100 clinical trials in Depression, Bipolar Disorder, Schizophrenia, Anxiety, Binge Eating Disorder, Fibromyalgia, Pain, ADHD, PTSD, and Opioid Use Disorder.

Together with his wife, Christina Dueno, a Psychiatric Nurse Practitioner, he founded TMS of Dayton in 2018 with a mission to provide superior mental health services to the Dayton and surrounding communities, and to lead the way in utilizing new advances in technology to treat psychiatric disorders. He is now pleased to be the first to offer NeuroStar TMS in the Dayton area for the treatment of depression.