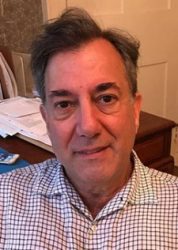 Dr. Jonathan Schwartz, MD, was born in New Bedford and has been practicing adult and child psychiatry in the area for more than 30 years. He graduated from McGill University Medical school in Montreal and trained at Massachusetts General Hospital (Adult Psychiatry) and Children’s Hospital (Child Psychiatry) in Boston. Dr. Schwartz specializes in the areas of Mood Disorders, Anxiety Disorders, Addictions, and ADHD. He served as the psychiatrist at U.Mass. Dartmouth from 1985 until 2016, and is currently the Medical Director at Steppingstone in Fall River MA.

Dr. Schwartz was approached by NeuroStar in late 2015 to start a TMS practice. He attended a conference later in the year, where a guest speaker shared his TMS success stories with the audience. Because Dr. Schwartz is results-focused and was blown away by the success rates, he decided to start treating patients with TMS in late 2016.

During the first three years of the TMS practice in New Bedford, Dr. Schwartz noticed that a significant number of his patients were traveling from Cape Cod to receive TMS in New Bedford. To better serve these patients, as well as people living on the south shore, Dr. Schwartz opened a second location in Plymouth, MA in 2019 and a third location in Mashpee, MA in 2020.