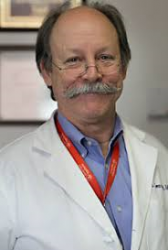 Dr. Mark George is one of the world's leading experts in the use of brain imaging and stimulation to understand depression and to devise new antidepressant treatments. In early research at the NIMH, he was one of the first scientists to expand the study of brain imaging technology for psychiatric disorders. He discovered specific brain changes that activated during normal emotions and began exploring brain changes in depression and mania. This finding led to using the noninvasive brain stimulation method, Transcranial Magnetic Stimulation (TMS), for treating patients with treatment-resistant depression. Dr. George also engages in other forms of brain stimulation; Vagus Nerve Stimulation (VNS), Transcranial Direct Current Stimulation (tDCS) and Deep Brain Stimulation (DBS). He is the the founder of the Brain Stimulation Laboratory (BSL) in the Department of Psychiatry at the Medical University of South Carolina, where he currently serves as the Medical Director. In addition, Dr. George is also the editor-in-chief of a new journal, Brain Stimulation and a distinguised Professor in the divisions of Psychiatry, Radiology and Neurosciences. Dr. Mark George is also the Layton McCurdy Endowed Chair.