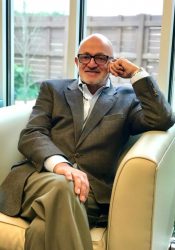 He attended Medical School at the Reprecht Karl University in Heidelberg, Germany, and graduated from Universidad Mayor de San Andres in Laz Bolivia, his hometown. Dr. Handal completed his internship and residency training in General Psychiatry at the State University of New York Health Science Center at Syracuse in Syracuse, New York. Following residency, he completed his Fellowship in Child and Adolescent Psychiatry at the University of Miami School of Medicine in Miami, Florida. Dr. Handal is a Distinguished Fellow in good standing of the American Psychiatric Association and the American Academy of Child and Adolescent Psychiatrists. At the present time he is Professor of Psychiatry and Behavioral Medicine at the Alabama College Of Osteopathic Medicine in Dothan, Alabama.

Dr. Handal is the Founder, Chairman, and Medical Director for Dothan Behavioral Medicine Clinic (DBMC) & Harmonex Neuroscience Research (HRX). As a practicing Board Certified Child, Adolescent and Adult Psychiatrist, Dr. Handal has dedicated much of his career to developing and implementing technologies that elevate the quality of patient care. His vision was born after many years of tireless work focused on perfecting a clinical model that uses technology while implementing sensible, practical, and modern clinical practices. DBMC is a large and modern mental health clinic which serves about 160 patients a day, half of whom travel more than an hour away.

Dr. Handal participates in extensive clinical research and has been primary investigator in over 70 clinical trials. He is a national consultant and speaker. In the late 1980s, Dr. Handal was president of one of the first telemedicine referral services in the world. This system was featured in Business Week. CliniCom® is an online psychiatric assessment tool Dr. Handal has been developing for the past 10 years and which has been used by over 25,000 patients. In May 2009 Dr. Handal was invited to testify before the United States House Committee on Veterans’ Affairs regarding innovative technologies and treatments for veterans; he spoke about CliniCom®.

Awards include the 2009 Heroes in the Fight Award given by Mental Health America and The Excellence in Public Mental Health Award for 2008 given by the National Alliance on Mental Illness (NAMI). In addition, Dr. Handal has also been recognized as one of America’s Top Psychiatrists for 2008 and 2007 given by the Consumers’ Research Council of America. His private practice, Dothan Behavioral Medicine Clinic, has received the 2008 Best of Dothan Award in the Physicians category by the U.S. Local Business Association (USLBA). Dr. Handal has also received the 2008 Patient’s Choice Award and the 2007 Mental Health Professional of the Year Award for Alabama. In 1996 Dr. Handal was presented with the Clinical Scholar Award conferred by the University of Miami School of Medicine. Dr. Handal is also recognized as a Distinguished Fellow of the American Psychiatric Association and Diplomate of the American Board of Psychiatry and Neurology.